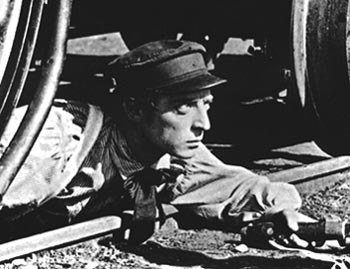 Der General (1926) Regie: Buster Keaton, Clyde Bruckmann Buch: Al Boasberg, Charles Smith, nach einer Erzählung von William Pittinger Kamera: J. Devereux Jennings, Bert Haines Produktion: Buster Keaton Productions Inc., USA 1926 Mit Buster Keaton, Marion Mack, Charles Smith, Jim Farley Länge: 78 Min., OF  Klavier: Gerhard Gruber   Lokführer Buster Keaton kann zum Leidwesen seiner Braut, die ihn gerne als Helden sehen würde, nicht am amerikanischen Bürgerkrieg teilnehmen. Als seine Lokomotive „The General" mitsamt seiner Braut von gegnerischen Truppen entführt wird, schaltet sich Buster ein, jagt ihnen nach und rettet beide - Lok und Frau - vor dem Feind. Ganz nebenbei kann er den Südstaaten noch zum Sieg verhelfen und wird so doch noch zum ausgezeichneten Helden. Buster Keatons berühmtester Film: Die Ereignisse überschlagen sich, eine Kette von Gags treibt die Handlung voran - die Stoik des Helden kann das jedoch nicht erschüttern! Comic genius Buster Keaton achieved an artistic milestone with the 1927 silent adventure, The General. Based on a true story, this Civil War tale not only starred Keaton, but was written and co-directed by him as well. Keaton, as confederate railroad engineer John Gray, attempts to thwart the theft of his beloved locomotive, "The General," by Union spies. He springs into action when he realizes the "other" love of his life, girlfriend Annabelle Lee, is taken captive. His adventure turns from drama to hilarity in a memorable and poignant fashion. Buster Keaton displays the deadpan countenance and brilliant comic timing that made him one of America's most beloved comedians and an icon of his era. One of Keaton's favorite films, The General is known for its masterfully composed action sequences and brilliant recreation of the Antebellum South. It is recognized by critics and movie afficionados as one of the greatest silent comedies of all time. Product Description: The two things engineer Johnny Gray (Buster Keaton) loves most in the world are his Southern belle sweetheart and his locomotive. When Northern spies steal the latter, the intrepid Confederate single-handedly takes on the entire Union army in order to get it back. Against a backdrop of magnificently photographed Civil War battle scenes unfolds one of the great chases in movie history. Set almost entirely aboard moving trains, Keaton's THE GENERAL is physical comedy refined to elegant perfection and widely considered to be the actor-director's greatest film. Keaton created this great comedy out of an authentic episode of American history - a story about the famous Civil War locomotive. This silent gem was selected by the Library of Congress for the National Film Registry. Running times vary by supplier.     * Based on an actual incident, though in real-life the locomotive was stolen by the Confederates. Keaton decided to switch it around, making the Union soldiers the bad guys. He felt that putting his hero on the losing side would make him more sympathetic.     * "The General" was filmed entirely on location in Oregon, the only place where Keaton was able to find both suitable scenery and the single-gauge railroad track he needed to run the antique trains. Keaton was a great train enthusiast and an absolute stickler for authenticity -- he always felt that he would get more laughs if his comedy evolved logically out of realistic situations. "The General" was unlike any other comedy ever made in that it was designed to look like a historical epic. Keaton used the Civil War photographs of Matthew Brady as a guide and "The General" remains one of the most convincing depictions of the Civil War ever put on screen.     * "The General" was Buster Keaton's favorite of all his films, and his pet project -- he poured his entire heart and soul into the production, sparing neither cost nor effort. The spectacular climax where the enemy locomotive crosses the burning bridge and crashes into the river below was done in one take using a real train. Onlookers from miles around gathered to watch the scene being filmed. Afterwards, the fallen train remained in the river bed for years, untouched.       Production values like this made "The General" one of the most lavish and expensive movies of its day. But it was a critical and financial flop at the time. Reviewers and audiences panned the film, complaining that it did not provide enough laughs. Over the years public opinion on "The General" has been completely revised. Not only is it considered Buster Keaton's greatest film, it widely recognized as one of the true masterpieces of American cinema.   http://filmmusik.at/ http://filmmusik.at/English/Gerhard-Gruber-Silentfilm-English.html http://filmmusik.at/Stummfilmpianist/Gerhard-Gruber-Stummfilmpianist.html